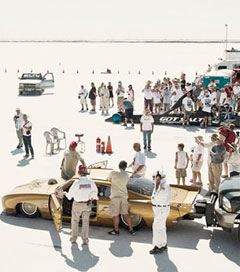 New Zealand-born photographer Simon Davidson’s “beguiling” portraits of drag racing shot on the Utah salt flats and at Lake Gairdner in South Australia feature in The Guardian this week. “Through clouds of pungent smoke and across shimmering salt flats … at races in Australia and on the eerie, crystallised plains of Bonneville, Davidson has captured perspectives which possess a pensive allure and thereby numb stereotypical notions of motor-sport. There’s something particularly cinematic about the scenes at Bonneville; the vintage vehicles and the pallid colours are suffused with nostalgia, while the motionlessness and detail within each frame are acutely observed. Even his burn-out pictures – the very epitome of wild, boorish behaviour – retain a certain tranquility; despite the chaotic intentions of the drivers, the engulfing smoke is so pervasive it forms a beautifully ambient stage.” The images form part of a series taken over six years called, “Salt and Smoke”. Davidson lives in Sydney.