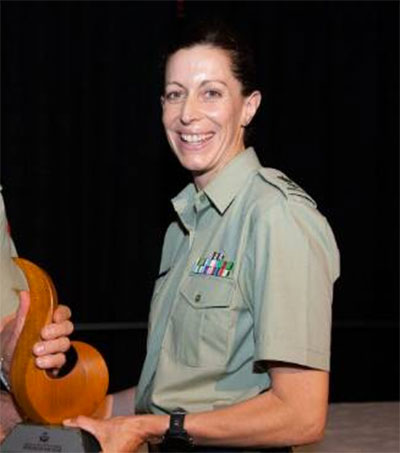 Lieutenant Colonel Melanie Childs, who took charge of soldiers and police to lead refugees to safety through a battle zone in South Sudan, has been named the New Zealand Defence Force Person of the Year in a ceremony at the Air Force Museum in Christchurch.

Childs was working at the UN headquarters in South Sudan’s capital of Juba in July last year, during what are now known as the Juba Clashes.

Fighting broke out between forces supporting the country’s president and its vice president. Hundreds were killed in skirmishes in and around the city, that at times involved tanks, rocket propelled grenades, machine guns and helicopters.

For five days, UN House, the headquarters Childs was serving at, was caught in the crossfire. 182 buildings in the compound were struck, and a neighbouring camp that protected as many as 27,000 displaced people also came under the hail of bullets and explosives.

Those killed included at least 20 people hoping for UN protection, and two Chinese peacekeepers. A later UN investigation found the response by their own forces was “chaotic and ineffective”, and the 1800 troops stationed at UN House had been “underused”.

“Lieutenant Colonel Childs took charge of infantry and police units that were in disarray, and helped shepherd thousands of displaced refugees who had been living in camps around the UN base, to areas that offered them greater protection,” Chief of the New Zealand Defence Force Lieutenant General Tim Keating said.

Childs is currently the commander of the 2nd Combat Service Support Battalion of the army and stationed at Linton Army Base.

Earlier this year, Childs was a guest lecturer at the Kofi Annan Peacekeeping Training Centre in Ghana.

She said winning the award felt surreal, especially being awarded it in her home town of Christchurch.

“I’m honoured and humbled to even have been considered.”