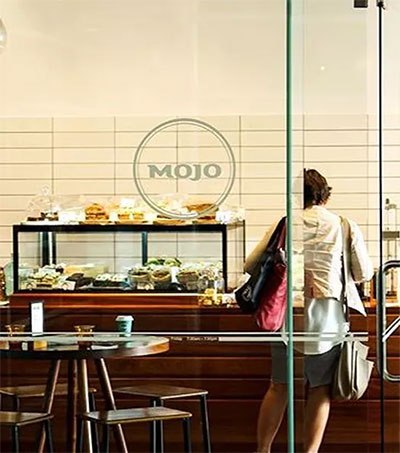 Coffee Chain Mojo to Open First US Shop in Chicago

New Zealand coffee chain Mojo is opening its first shop in the United States in Chicago near the city’s iconic Willis Tower in May. Mojo’s first store opened in 2003 and the company now owns 35 shops in New Zealand, with six in Japan and another in China.

The son of a Greek immigrant, co-founder Steve Gianoutsos got his start serving customers at his father’s New Zealand restaurant when he was “3 or 4” years old. He stood on a crate to get close to diners’ eye level, he said.

He opened Mojo, his third business, about 15 years ago after buying a coffee roaster and a how-to book. He’s steadily grown the business after a lot of admitted “trial and error.” Gianoutsos’ father, now 75 years old, is Mojo’s master roaster.

“A good regular is in our shops six times a day,” Gianoutsos said.

A flat white, the beverage native to Oceania combining foamy milk and shots of espresso, is the first thing on Mojo’s menu.

Gianoutsos said he wants to expand his chain here relatively slowly over the course of 5-10 years. One reason: Every shop’s interior is unique and “sympathetic to the building.” As such, he’s not chasing stores vacated by other coffee chains.

“Mojo is a really nice place to sit down and do what we’re doing: meeting,” he said. “Coffee is a vehicle.”