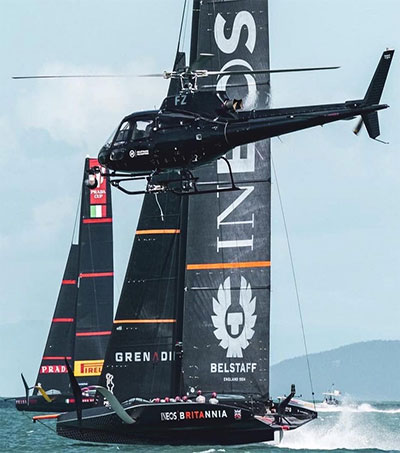 The America’s Cup scene-stealer this week may be the supporting actor that has been racing them: the helicopter filming the races between Emirates Team New Zealand and Italy’s Luna Rossa for international television broadcasts, Serena Solomon suggests in a story for The New York Times.

Its nail-biting manoeuvres, almost always at high speed and sometimes only a few feet above the water, have brought the sheen of a big-budget action movie to what can often be a relatively straightforward sprint, Solomon writes.

To do its job correctly, the helicopter’s pilot often matches the speed of the AC75s, levitating just above the water as it tracks them for miles up and down the course. The helicopter also flies backward, sideways and on diagonals as needed, diving down and up around the yachts as they all glide just above the water. And it must do it all while avoiding spectator boats, the whitecaps below and, most important, the multimillion-dollar AC75s and their 87-foot masts.

“It is just normal to me,” said Tony Monk, the New Zealander at the helicopter’s controls this year. “I feel safer in the helicopter than I do in the car.”