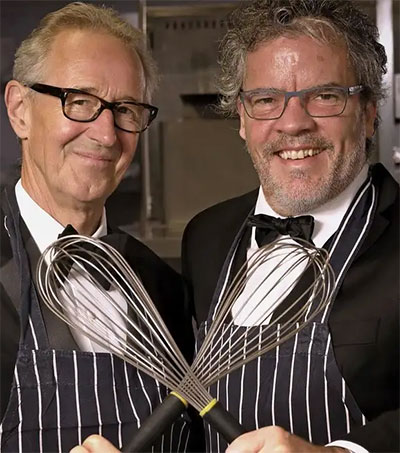 Twenty years ago, 20 chefs headed to the Berkeley at the behest of Peter Gordon (pictured right), the New Zealander best known at the time for his Sugar Club restaurants. With 20 tables of 10, each chef would cook for a decimette of diners; guests wouldn’t know whose food they were eating until the night itself. Afterwards, an auction; the money for Leuka, a leukaemia charity.

“Some chefs still really didn’t understand it until it happened,” Whanganui-born Gordon says. They called the night Who’s Cooking Dinner? and thought it a one off. But it raised some cash; quite a chunk of it, in fact, and then – well, it happened again, and the next year, and on, and on. The name stuck.

“The camaraderie in the kitchen is great,” Gordon explains, “Because many of today’s top chefs worked together as junior chefs in other London kitchens, so everyone is looking after everyone else. Plus, of course, everyone wants to see what their peers are doing, what plate colour is this season’s hot favourite, are we using foams or not …”

The money has been pretty good, too. After 19 dinners, Who’s Cooking Dinner? has raised more than £7 million for Leuka, a UK charity which funds scientific and clinical research into leukaemia and other types of blood cancers.

This year’s event is on at The Dorchester hotel on 4 March, with the world’s most successful restaurateur, Alain Ducasse, “the biggest draw”.