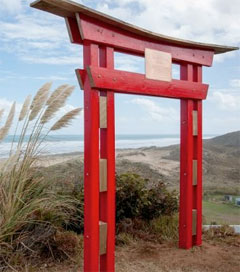 “When the steamer SS Ventnor sank off the [Hokianga Heads] in 1902, a Wellington newspaper listed its lost cargo in the language of the time as ‘5347 tons of coal consigned to the Admiralty at Hong Kong, 499 Chinese coffins, 144 sacks and 22 bales of fungus, one bale of tow and one bale of flax,’” Xinhua reports. The ship was carrying the remains of 499 goldminers who had died in the South Island’s goldfields and were to have to been buried in their home villages in China. “The dead were honoured last month, with a traditional ‘bai ji’ ceremony and the establishment of the Ventnor Grove of 22 kauri trees and a red Chinese gate, which was unveiled at Mitimiti, framing the coastline where many of the bones came ashore.”