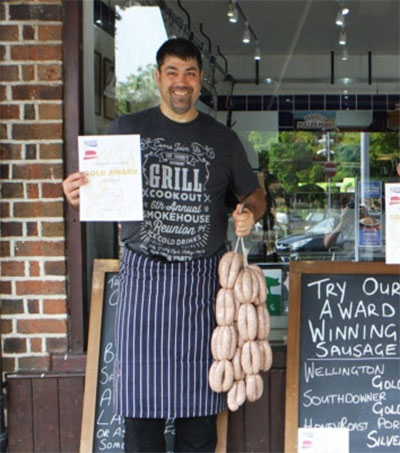 Originally a butcher in Rotorua, Karl Jelley has set up shop in the British town of Harpenden and is winning accolades for his sausages, and despite offering judges an over-sizzled sausage in a recent contest, they tasted good enough to win him silver.

Jelley, who has run his independent butchery in Harpenden for a decade, won gold for his “Wellington” sausage, with its ingredients including parsley, thyme and oregano.

A second gold award was given for the sausage Jelley created “for the village – it’s called the Southdowner, and it includes mustard seeds and green and red peppers.”

Jelley, who has been a butcher for 34 years, said the secret to making an award-winning sausage was “using good quality meat. I use Blythburgh free range pork”.

He entered his butchery’s three most popular sausages, which were pitted against 200 entries in the competition.