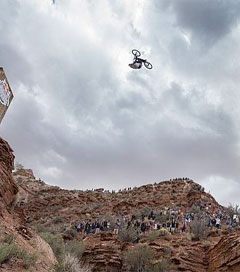 BMX Canyon Leap Just Felt Right so He Sent It

Footage of New Zealand BMX sensation Kelly McGarry’s 20 metre leap, complete with backflip, across a Utah canyon gap has gone viral. The incredible stunt won Nelson-born McGarry, 31, the hearts and minds of spectators, both on location and online. It also won him him the silver medal at the Red Bull Rampage, which was held in Virgin, Utah, on 11-13 October. “I was freaking out, wondering if I should do it. But I had the speed, it felt right, so I just sent it,” McGarry said after the jump. His 2013 triumph was a triumph for McGarry, who had set his sights on sailing over the gap at the 2012 event. The spectacular BMX track is the main attraction in Virgin, which is a two-hour drive from Las Vegas.