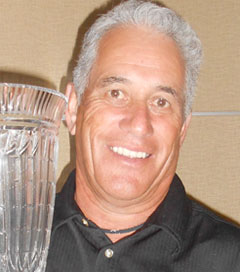 Murray Martin from New Plymouth has become the first New Zealander since 2009 to win the Australian Men’s Senior Amateur Championship with a six stroke victory at Royal Queensland Golf Club.

Martin finished with rounds of 74-74-74 to be at 6-over par. He is only the second New Zealander to win the title, following in the footsteps of three-time champion Rod Barltrop.

Martin said he was delighted to win the title.

“It’s been great to come over and play with my Australian mates and wonderful to have my family here to see me sink the last putt to win the championship.”

The first Australian Men’s Senior Amateur Championship was first played in 1981 and is contested over 54-holes Stroke Play.

Players must be 55 years and over to be eligible for the Championship.