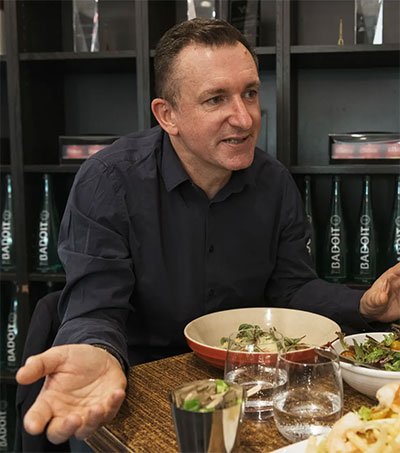 The crisis and the economic repercussions of the COVID-19 pandemic will test New Zealander Blair French’s management strengths as much as his curatorial abilities, Sydney Morning Herald journalist Linda Morris writes. But the chief executive of Sydney’s Carriageworks knows better than most the part the arts can play in leading community renewal and resilience following natural disaster, having curated two iterations of SCAPE Public art after the Christchurch earthquakes. Morris recently interviewed French over a meal at Bitton restaurant in Alexandria.

In the coming weeks, Carriageworks will be announcing the creation of an online hub called the Carriageworks Journal bringing world premiere performances, interviews with artists, playlists, podcasts, articles and recipes, Morris reports.

It will be Carriageworks, just delivered differently, French says.

After graduating in art history and English, a colleague alerted him to curatorial internships on offer through the newly established Museum of New Zealand Te Papa Tongarewa project and he was placed at the National Art Gallery in Wellington.

It was the first of several turning points in a life he describes as the sum of small decisions and opportunities building on each other. “I was writing professionally about art at that point. I don’t know whether I ever would have pursued a curatorial career otherwise,” he says.

French’s appreciation for Australian art strengthened when he took up positions at the Australian Centre for Photography and writing for Art & Text and other periodicals, at an exciting time when artists such as Tracey Moffatt, Destiny Deacon, and Bill Henson were on the rise.

“All that said, if there was a work I’d love to have on my wall to stare at day after day, it would be almost anything by New Zealand photographer Laurence Aberhart, whose large formal black and white works not only chronicle the landscape, urban spaces, interiors, and memorials of the country, but do so in an amazingly resonant manner as if all time and history were collapsed into each image.”