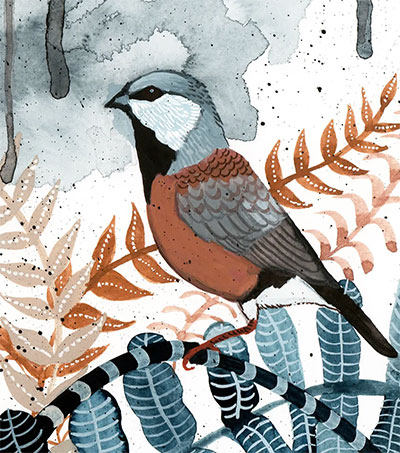 Queenstown-born visual artist and writer Charlotte Watson is the instigator of the Black Finch Project, for which more than 1400 artworks featuring the endangered black-throated finch have been sent to Australian politicians in protest against the proposed Adani Coal Mine in the Galilee Basin.

According to The Guardian, The Black Finch Project is intended to highlight the ‘collective grief’ about the plight of the bird, whose habitat is directly threatened by the mine works. The UK publication features a picture essay of some of the contributing artists and members of the public who explain why they contributed.

Sydney artist Sally Browne contributed an artwork (pictured) to the Black Finch Project because she is opposed to Adani’s Carmichael coalmine and “loved the idea of sending something beautiful to the decision-makers to help them connect with their hearts and change their minds”.

Watson was born in 1988. She graduated from the University of Canterbury with a BFA in Sculpture in 2011, and is currently based in Melbourne.