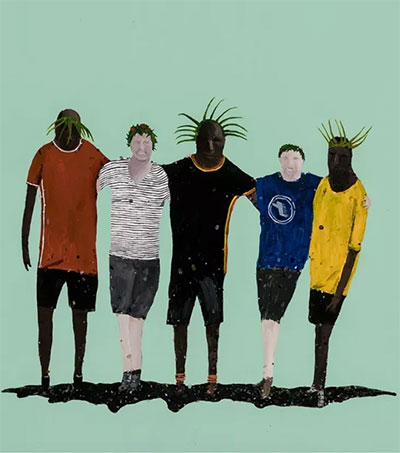 Richard Lewer “is a New Zealand-born artist with an understanding of history and a sense of compassion”, John McDonald writes for The Sydney Morning Herald in an article about Lewer’s current exhibition, which is on at Sydney’s Sullivan+Strumpf fine art gallery until 16 March.

“In paintings, drawings, installations, animated films and dioramas, Lewer has looked at small-scale instances of crime and social injustice, and the experiences of soldiers during the First and Second World Wars,” McDonald writes. “In ‘The Adventure of a Lifetime’, Lewer is showing works based on his recent experience of walking the Kokoda Track.

“The show consists of two seven-metre paintings, seven portraits of the local guides who assisted in the seven-day trek, and 31 drawings. Lewer depicts the present-day landscape and delves into the history of the Track – a rugged 96km pathway that runs through the Owen Stanley Range. It was the scene of fierce fighting between Allied and Japanese forces in 1942, and is viewed today as a sacred site of Australian military history.

“The title of the show refers to the propaganda used to encourage young men to sign up for fighting in New Guinea. It was an ‘adventure’ that would prove fatal for many, and traumatic for everyone who took part. In his deadpan, understated style, Lewer restages famous images from the conflict, matching them with records of his own journey, allowing the past to insinuate itself into the present.”

Lewer won the Wallace Art Award in 2008. In 2014, he was the 63rd recipient of the Blake Prize for Religious Art and he was the winner of the Basil Sellers Art Prize in 2016, with his submission of a series of oil paintings titled ‘The Theatre of Sports’. He was an Archibald Prize finalist in 2017.

Lewer was born in Hamilton in 1970. He is currently based in Melbourne.