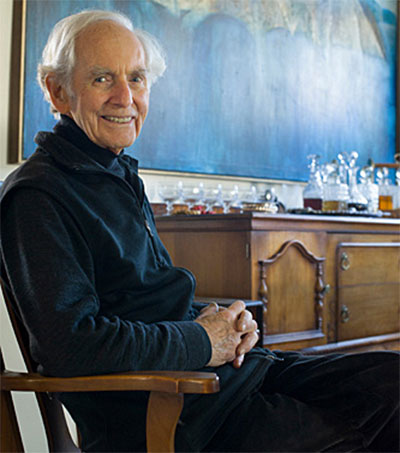 Day studied at the Courtauld Institute in London under the Cambridge spy Anthony Blunt, and brought a Modernist eye to the prospects and people of his homeland, New Zealand.

Hamilton-born Day gave his post-war landscapes, still lifes and images of Maori meetings a cubist sensibility, the Telegraph writes in an obituary. His Boats in Wellington Harbour (1951) is a simple but striking angular composition which blends landscape and industry.

“The gritty parallel of cranes with hills shows how much expertise Day had for relating geometry to place,” noted one gallerist.

Arriving in London in the early 1960s, Day was the first New Zealander to study European Art at the Courtauld, at the time under the direction of Blunt. Although Day would remain a somewhat obscure figure in Britain following his return to New Zealand at the end of the decade, at home he was celebrated for his colourful palette and fractured compositions, which drew comparisons with the work of Cezanne, Braque and Picasso.

“His grasp of the tenets of Cubism and Modernism was tenuous,” Day’s biographer Mark Hutchings said. “It could be argued, however, that such a partial grasp of Modernism characterises much of the best art produced away from traditional art centres.”

By the early 1960s he had gained international recognition, prompting his move to London. In 1963 he enrolled at the Courtauld and the following year featured in the Young Commonwealth Painters showcase at the Whitechapel Gallery.

In 1968 he returned to New Zealand and the same year was made director of the National Art Gallery of New Zealand, a position he held for a decade, after which he became the government’s official art historian. He also won commissions to paint prominent national figures, including the opera singer Sir Donald McIntyre.

In 2003 he was appointed a companion of the New Zealand Order of Merit for his services to the arts.