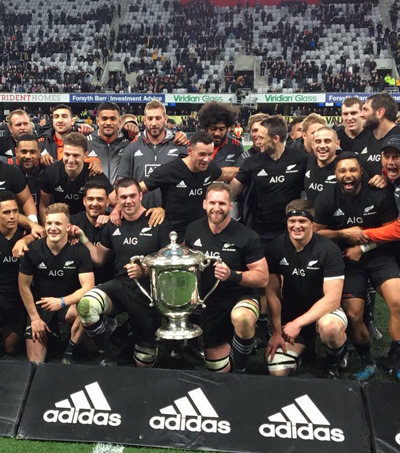 The finishing thrust that All Blacks coach Steve Hansen had been seeking all season finally returned during the weekend as Beauden Barrett scored a last-gasp try to give them a 35-29 victory over Australia in their Rugby Championship clash at Forsyth Barr Stadium in Dunedin.

The victory ensured the All Blacks retained the Bledisloe Cup for the 15th successive season.

The world champions, however, had to dig deep after they had conceded an early 17-0 deficit and then had to overcome Kurtley Beale’s 76th-minute try that had given the Wallabies a 29-28 lead.

“Really, really proud of the boys,” Hansen said. “To give a side like Australia 17 points at the start and to keep their composure and just be three behind at halftime, then hit the front and then lose it again near the end. Really proud of them.”

Hansen had special reason to savour the win after pundits; fans and the media in rugby-mad New Zealand had started to question the team’s mental toughness following a drawn series against the British and Irish Lions earlier this year.

Previous All Blacks sides under Hansen had a knack of overcoming big deficits and somehow winning games they should have lost.

The week previous in Sydney against the Wallabies they raced to a 54-6 lead after 48 minutes then took their foot off the gas and Michael Cheika’s side scored four unanswered tries.