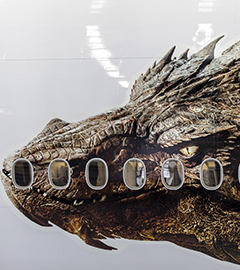 An Air New Zealand Boeing 777-300 that the Weta Workshop team in Wellington have fitted with a 54-metre long image of Smaug the dragon from The Hobbit: The Desolation of Smaug was unveiled yesterday morning.

The application of the decal was completed in time for the unique plane to fly to Los Angeles yesterday for the film’s premiere.

New Zealand’s national carrier was proud to offer fans their first opportunity to see the eagerly anticipated creature, as the first film only showed the creature’s eye.

The creature will be voiced by Sherlock actor Benedict Cumberbatch, whose physical acting skills were incorporated into Smaug via motion capture.

Air New Zealand spokesperson Andrew Aitken says the airline will keep the image of Smaug on the Boeing until the opening of the third and final film of the trilogy.

The Hobbit: The Desolation of Smaug is the second part of The Hobbit trilogy directed by Peter Jackson, and made in conjunction with Weta Workshops.

Weta Workshop is an internationally acclaimed conceptual design and physical manufacturing facility based in Mirimar, Wellington and led by Sir. Richard Taylor.

To coincide with the premiere of the second film, the Beverly Hilton hotel in Los Angeles has been fitted with a large ‘pop-up book’ of film locations.

Standing 50 feet high and spanning the space of two tennis courts, the book is a replica of four Middle Earth landscapes with original props that visitors can explore.

The Hobbit: The Desolation of Smaug opens in cinemas on December the 13th.