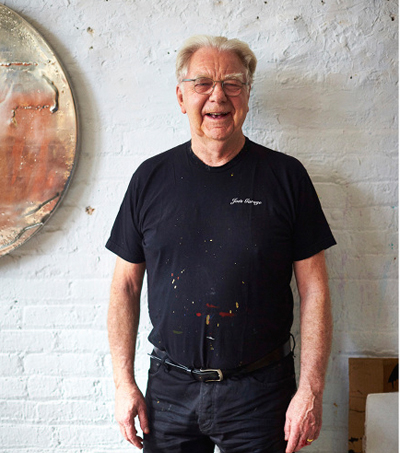 Max Gimblett is a “true maverick” and “part of the living history of artists in New York”, writes Australian photographer Paul Barbera, who caught up with the Kiwi artist for a shoot and interview as part of his ‘Where They Create’ project.

“I love his accent – it’s very old school, a mix of the colonial British influence with the informal nature of Kiwis,” writes Barbera, who first met Gimblett when he was shooting a story on his wife Barbara Kirshenblatt-Gimblett – a scholar of performance and Jewish studies.

Gimblett has lived in New York since 1972. “New York City inspires me by its diversity, activity, range of fascinating people, and the impression I have of living indoors without much contact with nature,” he said.

The artist describes his ideal workspace as: “Large, industrial and white-space.”

When asked if he has anything in his workspace that Barbera would be surprised to find he said: “A human skull. A squash racket. 14 pairs of John Fluevog shoes.”

Gimblett acquired his space, which was built in the 19th Century and occupied by very fine artists in the late 60s, from pop art star Jim Rosenquist.

In his work he pursues a range of themes:  “The Spiritual. The 5th Dimension. New York/New Zealand hybrids. All mind no mind. One stroke bone. Loaded brush to unloaded.”

His dream project would be a one man show at the Guggenheim Museum.

When asked what his most important artist’s tool was, he replied: “My collection of some hundreds of Chinese calligraphy brushes.”

He said he makes the best art when he is “Unconsciously, contemplative, given over to gesture.”