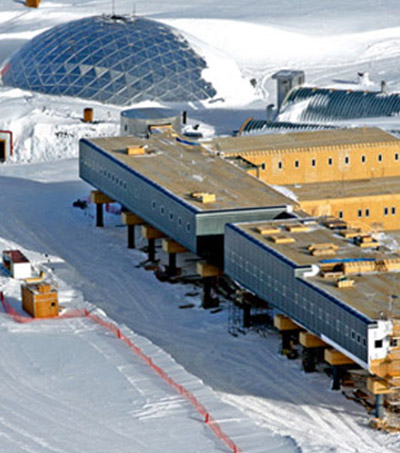 The locale of one of today’s greatest real estate development grabs might surprise you. It’s not Dubai, Las Vegas, or Shanghai, but the frozen continent that rests at the end of the world. Writing in The New York Times in late December 2015, Simon Romero describes increased activity from various global players, including Russia building its first Orthodox church (with logs imported from Siberia), China’s plans to operate five bases (complete with indoor badminton court in its Great Wall Station), and India’s spaceship-looking Bharathi base, built on stilts and interlocking shipping containers. “An array of countries is rushing to assert greater influence here,” Romero writes, “with an eye not just toward the day those protective treaties expire, but also for the strategic and commercial opportunities that exist right now.”

Why the race to the bottom? “The newest players are stepping into what they view as a treasure house of resources,” University of Canterbury School of Social and Political Sciences Professor Anne-Marie Brady told the Times. A treaty banning mining in Antarctica—which shields coveted reserves of iron ore, coal, and chromium—is expected to come up for review by 2048 and the continent’s mineral, oil, and gas deposits are all highly prized. The Times article details how researchers recently found deposits that hint at the existence of diamonds in the region and geologists estimate the area holds at least 36 billion barrels of oil and natural gas. Rather than the desolate, monolithic icescape of popular imagination, Antarctica is shaping up to be a 21st century geopolitical hotspot.

Professor Brady is perhaps the world’s foremost scholar at navigating Antarctica politics. Editor of The Emerging Politics of Antarctica (2012, Routledge Advances in International Relations and Global Politics), a volume that examines the post-Cold War challenges facing the continent’s governance, Professor Brady specializes in subject matter related to the power and influence of China, New Zealand’s largest trading partner and the nation that arguably has the fastest-growing operations in Antarctica. Prof. Brady has published groundbreaking research in the field, covering China’s modern propaganda system and the nation’s relationships with Antarctica and the Pacific, as well as major revisionist histories of the Long March and of New Zealand’s national icon, Rewi Alley.

On the University of Canterbury website, Prof. Brady suggests that students take a rounded approach to their education in order to maximize career opportunities. “New Zealand urgently needs to develop its own pool of China specialists,” Professor Brady says, offering advice on how students can avoid being frozen out of a changing global economy. “Having language skills is not enough, and learning about Chinese politics or marketing or law without investing in the language skills is also not enough. . . New Zealand students need to seize the opportunities which our ever-increasing relations with China will offer by taking appropriate courses for the current job environment.”